Join our newsletter below for the latest news, deals, and updates!

If you are looking for someone of a similar skill level to train, explore, or just cruise with in your town or on your next trip this is the place to find and connect!

Members who have completed their member bios can now search in designated cities to find other paddlers, who have similar skills, experience, and interests so that more paddlers can get on the water safely. How cool is that!? If this sounds good to you please fill out our Bio on your account page and start a conversation!

*As always, your information is only used to help paddlers find other paddlers within the Perfect Paddles Community. Community etiquette does apply. This is not a dating service. This to find paddle buddies so we can support each other while we paddle and explore.

We are super excited about bringing this feature and are currently looking for BETA testers in the following areas – Los Angeles, San Francisco, Boston, New York City, Miami, Seattle (more will be added as the community grows.) please click HERE to connect with us to add your name to our beta test list. We appreciate your help and support in growing the SUP community!

Here’s how it works

Rules and guidelines and expectations for Buddy search –  We have zero tolerance policy please treat other paddlers like you would want to be treated. The Paddle Buddy Search feature is for enabling paddlers to meet and look out for one another to grow our community and help paddlers enjoy new areas safely

If someone does over reach please email [email protected]

Thank you for joining us – welcome on board! Here are some tips on making the most of your membership.

Fill out your Paddler bio and share your experiences with other paddlers.
Complete your profile

Check out the SUPer search page
Search by location and even filter your search for specific activities like SUP yoga, downwinders, SUP kids camps, and a ton more. Refine your search to include race board rentals shops, performance paddles; water types like beach and bay or even River and white water.
Search now

Looking for paddle Community events or interested in making a new Paddle Buddy?
Go to SUPer search and explore SUP activities like Beach Cleanups, SUP n Sips, or SUP socials. Looking for a Paddle Buddy to train with or show you around a new location? Check out the Paddle Buddies Forum  create a post with your name, and location you want to find a Paddle Buddy. Paddlers can check out your paddle background so you can find a good fit for your experience level.
Find an event near you

Paddle Business Profiles
Showcase the best SUP activities, gear, and insider info like best months to paddle or Featured Activities. Look for a Paddle Pro Spotlight and hear directly from the paddle Pro about their signature activities as well as local restaurant and accommodation recommendations so you can plan your next Perfect Paddle trip.

Message a Pro
On the top right corner of each Paddle Business Profile so you can send a direct message with questions about the launch spots they know best or to schedule and activity directly with them. Some Paddle Pros may take up to 24 hours to respond or a Perfect Paddles Team member will jump into the conversation to assist you.

Get a Buddy Deal!
As a Perfect Paddle Basic SUpporter + we know you love to paddle and You deserve a Buddy deal. A Buddy deal is a friendly gesture from the local Pro some are 20% off activities or more! Once you find a Paddle Pro offering a Buddy deal simply download it and present it when you make a purchase or, for walk ups, show the digital version. Your discount will be taken at the time of purchase. The more you paddle the more you save!

Featured Trips And Activities
Some of the most exciting SUP events happening all over the world. From night time Glow paddles from Hawaii to Croatia; Wildlife tours like Manatee eco-paddles in Florida to Harbor Seal paddles on the Coast of Ireland; multi-day paddle excursions in the Philippines, Norway, Chile, you name it some paddle Pro has found, explored and planned a paddle trip to get paddlers of any level out and exploring far flung paddle places all around the world. Keep an eye on this page as new Trips pop up all the time!
Explore Trips & Activities

Perfect Paddles
is your online paddle resource for paddle guidance from the local Pros who know the best places to paddle in the world. We are a paddle club where the paddle community can meet, and plan adventures together. Paddlers, who paddle often, get major savings on rentals, lessons, tours, and workouts, all around the world. Any paddle can be Perfect with some know before you go help from your local paddle Pro.

Thank you for your membership and helping us grow the stand up paddleboard community together!

What is a Buddy Deal

The Buddy Deal is an integral part of what we offer our members and is a great way to draw attention to your Trips and Activities plus you’ll give our paddle community a warm fuzzy, feel-good vibe!

A Buddy Deal is not required for your free listing. If you decide to offer one however, we will create a Paddle Spotlight for your business and give you more promotion on social media.

Today we are joined by Mike of East of SIX SUP in Toronto, Canada

Hi Mike, could you tell us a little bit about East of SIX SUP?
EAST OF SIX SUP is a full service SUP business based just 5 minutes east of the Toronto downtown core. Taught by Paddle Canada Advanced Skilled SUP instructors, we offer SUP Yoga and beginner daytime and sunset lessons, tours and rentals. 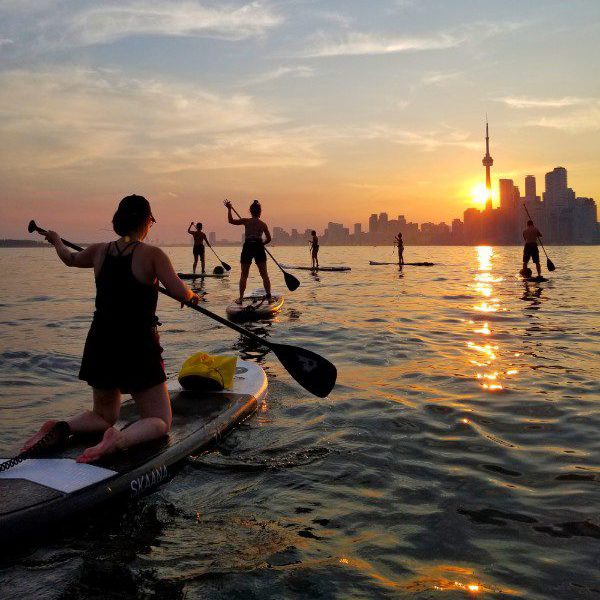 Location Overview – Tell us about your water environment
We operate out of Cherry Beach just minutes away from Toronto’s downtown core. After a brief beach lesson we head into the water and minutes away is the canal leading into the Toronto harbour! We hear “Wow” alot when we turn the corner as the Toronto skyline is pretty stunning. We have Cabana Pool Bar to our right and in front of us we have the skyline which includes the iconic CN Tower and the Rogers Center. There’s tons to look at including the planes flying over us coming into land and taking off from the Toronto Island Airport!

The Sunset SUP lesson and tour is our most popular lesson. It runs from 6:30-9:30 Tuesday through Sunday and is a show stopper!   We start off with an into lesson on the beach followed by an in the water lesson. We then paddle over to the Toronto Island and explore the harbour while our instructors give some history lessons about the island. Once we arrive on the island we stop for a dinner break overlooking the Toronto skyline. We provide drybags so people can bring their dinner. Once break is finished we go out in front of the skyline at Sunset and do a photo shoot of our students in front of the skyline and send send everyone their photos following their evening! 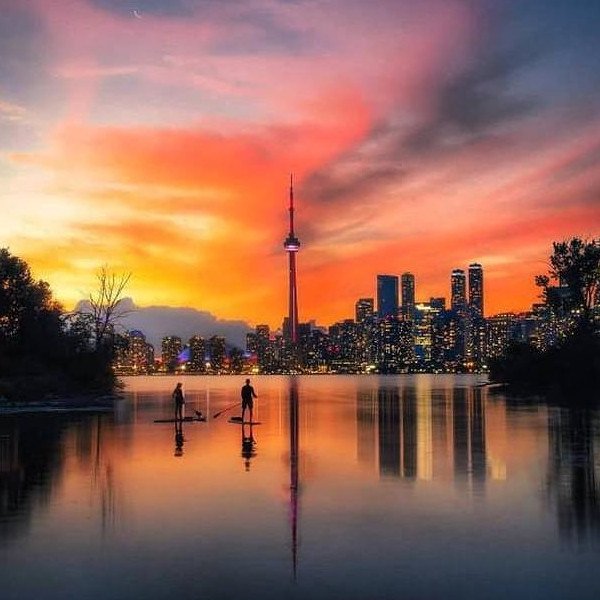 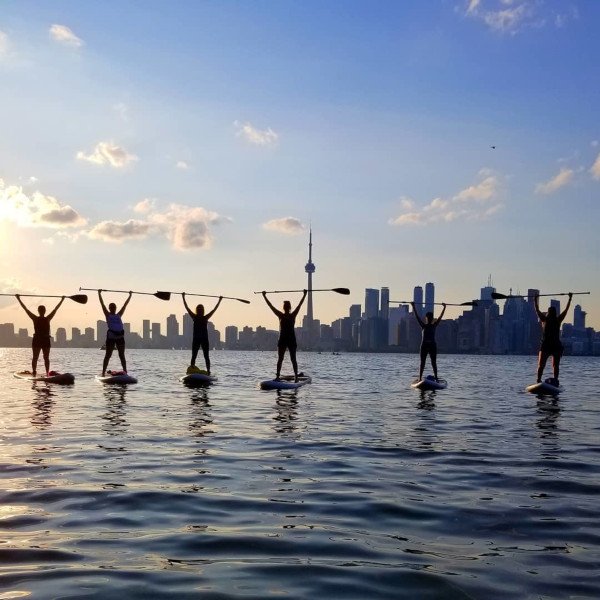 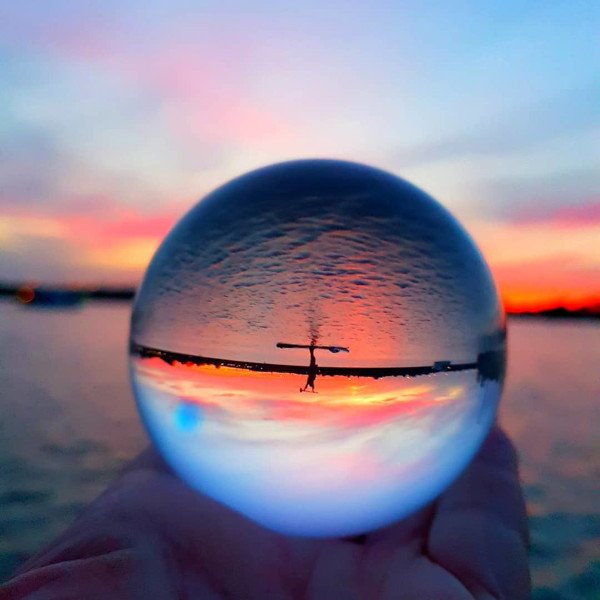 Are there any other local attractions others may be interested in?
There is a bird aviary we paddle to a few times a week which a variety of birds and bird watchers go to by foot.

Do you have a season or do you operate year round?
We operate May through September and sometimes into October, weather dependent of course. The fall colours on the trees add to the scenery and make for a fun paddle session.

Tell us about your favorite local food and why you love it
Our fave is El Catrin Distilleria in the historic Distillery District. About a 5 minute drive from Cherry Beach, El Catrin is an authentic Mexican Restaurant with Guacamole made at your table and Margaritas you won’t want to stop drinking!

Where would you recommend travelers stay nearby?
One King West is our hotel of choice!  A boutique hotel in the downtown core, it’s central to everything a tourist could possibly need and our top tip ask to see the Vault in the basement, it is an old converted bank!

Are there any additional activities nearby that you recommend?
Take in a concert, head over to the St. Lawrence Market for some food shopping on the weekends, Get some tickets for the Blue Jays or Toronto Raptors. If you are a thrill seeker you could always head up to the top of the CN Tower and do the edgewalk where you walk around the top!  Its a 1,815 feet up adventure you will never forget!

Buddy Deal: (What is this?)
Perfect Paddles member get 10% off services
Member Download here

Beginner
You have had no or limited experience on a board or have limited skills. You aren’t comfortable in bumpy water, have only paddled a few times and/or haven’t fallen off a board yet. (If you have fallen it’s by accident and likely not because you were pushing your skills to the next level.)

Advanced Beginner
You are relaxed standing on a board must know how to swim, can fall off and climb back on your board with no problem. you have paddle 5 plus times and can paddle comfortably in boat and wind waves (not on knees), can paddle straight and have directional control of your board. You can paddle in up to 8knots of wind and small wind and boat wakes comfortably.

Intermediate
You paddle regularly and, know how to paddle straight, have directional control, and can create speed with a full body stroke. You can fall off and get back on your board. You may also know how to walk on your board, know a cross bow and experience paddling with boat wakes or wind waves without getting on your knees. You can paddle in wind up to 12knots if needed and have paddled in slow moving water (river and/or Ocean) conditions and may even have a race or two under your belt. You are able to read the water in average conditions, and understand rules of the road in busy waterways

Intermediate +
You paddle often, probably own your own board (or several), you can pivot turn, surf waves 2-4ft waves and/or race, and/or downwinder, and/or moving water conditions class 1 river.You race, surf, whitewater, downwinders, podium or get close in local races you train to paddle and paddle to train.

Advanced
You are comfortable in more than one of the following: 10k plus races, surf 4-5+, whitewater, downwinders, multi-day excursions and may even teach of lead groups for any of the above

Meet and connect with like-minded and skilled paddlers!

From All Around the World

Our mission is to build and maintain the largest directory of SUP activities, environments, and service providers all over the world.

Our super search tool allows you to explore, find, and plan Perfect Paddles at your fingertips

Explore our Super Search for to find your Perfect Paddle!

Create your own Paddle Profile

A conditioning regimen beginning at least 2-3 months prior to departure is highly recommended. Walking/hiking, running and biking are all great ways to physically prepare for this adventure. The better shape you are in, the more you’ll be able to enjoy all that the Czech Republic countryside has to offer! Note: Most days include a van transfer ranging in length from 30 minutes to 2 hours.